Nightlatch – What to Know

Nightlatch – What to Know

Nightlatch – What To Know

When it comes to locksmith security, it’s easy to be blinded by new technology. Although some of the modern security solutions have proved to be popular, there’s no denying that the conventional measures of yesteryear are still as popular today.

The nightlatch is commonplace in many homes and businesses, and this blog will explain what a nightlatch is, and the safety measures it can offer both businesses and homeowners.

If your nightlatch question isn’t answered by the end of this blog, please leave a comment and I will update the blog to include an answer for you. Or, if it’s urgent, get in touch directly.

Brilliant, Jeff came to my house within 8 mins of me calling, I am delighted with what he did.

What is a Nightlatch?

A nightlatch is fitted on the internal side of a door and will help give the door more sturdiness when in a locked position.

If the door needs to be kept open, there is also an option to keep that latch inside the casing so there are no accidental lockouts.

Generally, night latches will come in two sizes. 60mm is commonly used for conventional doors, whereas those using glass panel doors will often choose a 40mm back set.

When looking at nightlatches, this is one of the most recognised designs. As the nightlatch can only be activated via the switch on the inside, they are often referred to as “non-deadlocking night latches”.

Although this type of nightlatch helps stop entry from the ‘slipping card’ method, they shouldn’t be relied on alone when securing your premises.

Those choosing this type of nightlatch, or those who already have this type installed should combine their nightlatch with a British Standard 5 lever deadlock for proper security.

Very similar to the non-deadlocking nightlatch but has the benefit of being able to deadlock the property from the outside using a key.

As before, this type of lock needs to be partnered with a British Standard lever deadlock.

Geoff turned up on time, explained the problem and fixed it for what I thought was a reasonable price.

These types of nightlatch differ to the previous two, in that they have a deadlocking pin above or below the bolt.

This means that when a door is closed, the pin is depressed into the casing, ensuring that nightlatch is automatically deadlocked.

The handle on the interior of the door can also be locked with a key, which is known as double-deadlocking.

This kind of nightlatch can be ideal for glass panelled doors. Even if the glass panels are broken, those looking to gain entry to a property will still have problems with the nightlatch itself, as they will be unable to operate the handle.

The British Standard Nightlatch can offer the maximum security and conforms to insurance approval BS Standard 3621.

As well as auto-deadlocking taking place as soon as the door is shut, there is also an anti-drill feature in place to protect against forced entry using a drill.

The door is operated from the inside using a key and the lever handle, while outside operation uses a key only.

These type of nightlatches are best suited to inward-opening doors and wont work on outward opening doors.

Very impressed with the work carried out. Phoned at lunchtime, work completed later that afternoon.

When To Use Automatic Deadlocking Nightlatch

The use of deadlocking nightlatch is often to provide more security, so they are often used when locking up a premise for the night or securing a household.

As well as being secured against unwanted visitors, it also acts as a deterrent to those who may a bit more daring when it comes to accessing properties.

As the handle is locked in place, even getting through a glass panel will prove to be fruitless, but there are some considerations that need to be mad

For example, once a nightlatch deadlocked has been locked from the inside using a key, then it will need to be unlocked in the same way, which cause some to be locked inside the premises. As such, these types of nightlatches shouldn’t be used on shared or communal doors.

There are several nightlatches available that still meet the BS: 3621 standards, but the internal handle can be used to open the door from the inside.

These type of nightlatches are beneficial for communal and shared properties as is commonly known as “Egress Function”.

These type of nightlatches can also be fitted with an electric door release. Given how complex the installation of this type of lock can be, it’s best to employ the services of a professional locksmith.

Hopefully, this blog should have made clear what type of nightlatches are best suited to your property, but if you still have any questions or queries, then feel free to contact Jeff at Seymour Locksmiths on 07710 408414.

Jeff was brilliant. He arrived when he said he would and charged an extremely fair price – came out first thing on Christmas morning, after I called him late on Christmas Eve – so grateful as was an emergency – I was away and my neighbour couldn’t get in to feed my cats. Very grateful to him and would highly recommend. 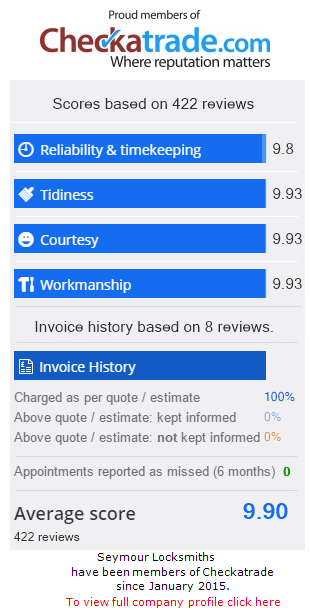